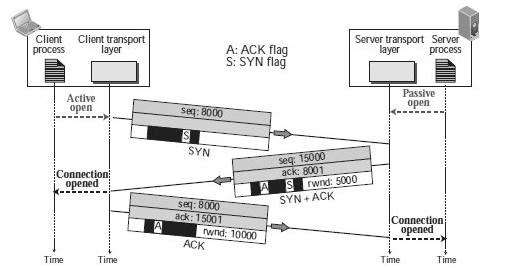 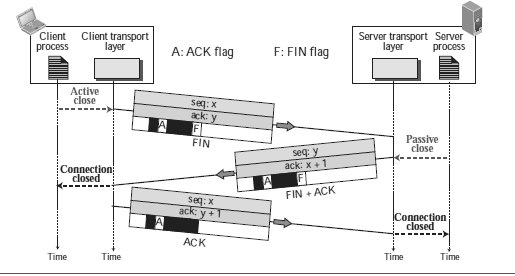 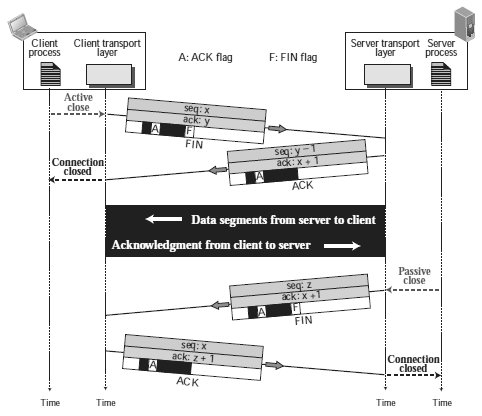 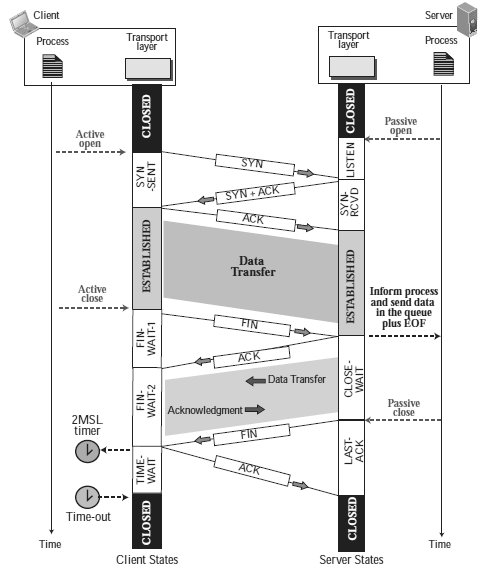 There are two reasons for the existence of the TIME-WAIT state and the 2SML timer: 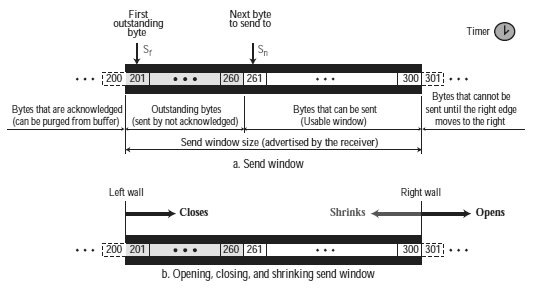 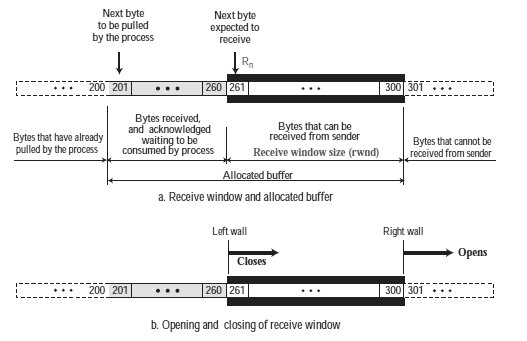 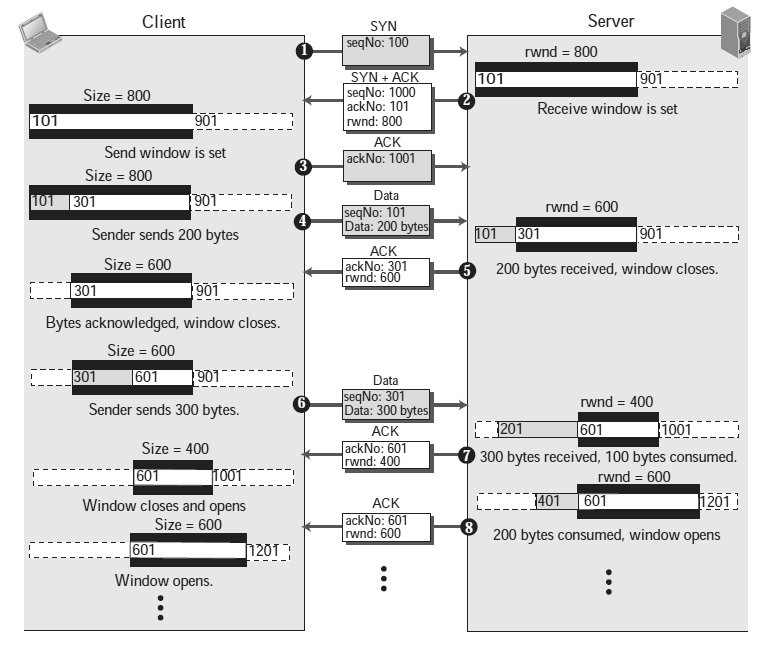 1. Client sends the server a SYN to request connection. The client announces its ISN = 100. The server, allocates a buffer size of 800 (assumption) and sets its window to cover the whole buffer (rwnd = 800). The number of the next byte to arrive starts from 101.

2. This is an ACK + SYN segment. The segment uses ack no = 101 to show that it expects to receive bytes starting from 101. It also announces that the client can set a buffer size of 800 bytes.

3. The third segment is an ACK segment from client to server.

4. After the client has set its window with the size (800) dictated by the server, the process pushes 200 bytes of data. The TCP client numbers these bytes 101 to 300. It creates a segment and sends it to server. The segment has starting byte number as 101 and the segment carries 200 bytes. The window of client is then adjusted to show 200 bytes of data are sent but waiting for acknowledgment. When this segment is received at the server, the bytes are stored, and the receive window closes to show that the next byte expected is byte 301; the stored bytes occupy 200 bytes of buffer.

5. The fifth segment is the feedback from the server to the client. The server acknowledges bytes up to and including 300 (expecting to receive byte 301). The segment also carries the size of the receive window after decrease (600). The client, after receiving this segment, purges the acknowledged bytes from its window and closes its window to show that the next byte to send is byte 301. The window size decreases to 600 bytes. Although the allocated buffer can store 800 bytes, the window cannot open (moving its right wall to the right) because the receiver does not let it.

6. Sent by the client after its process pushes 300 more bytes. The segment defines seq no as 301 and contains 300 bytes. When this segment arrives at the server, the server stores them, but it has to reduce its window size. After its process has pulled 100 bytes of data, the window closes from the left for the amount of 300 bytes, but opens from the right for the amount of 100 bytes. The result is that the size is only reduced 200 bytes. The receiver window size is now 400 bytes.

7. The server acknowledges the receipt of data, and announces that its window size is 400. When this segment arrives at the client, the client has no choice but to reduce its window again and set the window size to the value of rwnd = 400. The send window closes from the left by 300 bytes, and opens from the right by 100 bytes.

Syndrome due to Sender

Syndrome Created by the Receiver

There are two types of acknowledgment:

1. When end A sends a data segment to end B, it must include (piggyback) an acknowledgment that gives the next sequence number it expects to receive. This rule decreases the number of segments needed and therefore reduces traffic.

3. When a segment arrives with a sequence number that is expected by the receiver, and the previous in-order segment has not been acknowledged, the receiver immediately sends an ACK segment. In other words, there should not be more than two in-order unacknowledged segments at any time. This prevents the unnecessary retransmission of segments that may create congestion in the network.

4. When a segment arrives with an out-of-order sequence number that is higher than expected, the receiver immediately sends an ACK segment announcing the sequence number of the next expected segment. This leads to the fast retransmission of missing segments.

5. When a missing segment arrives, the receiver sends an ACK segment to announce the next sequence number expected. This informs the receiver that segments reported missing have been received.

6. If a duplicate segment arrives, the receiver discards the segment, but immediately sends an acknowledgment indicating the next in-order segment expected. This solves some problems when an ACK segment itself is lost. 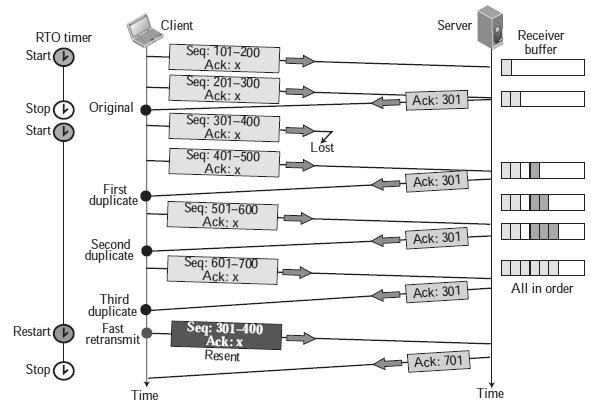 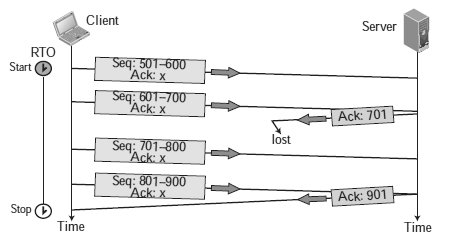 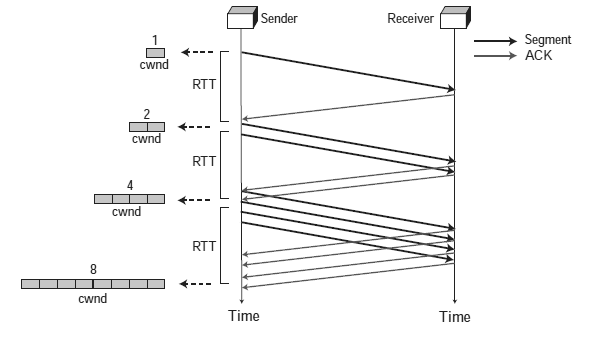 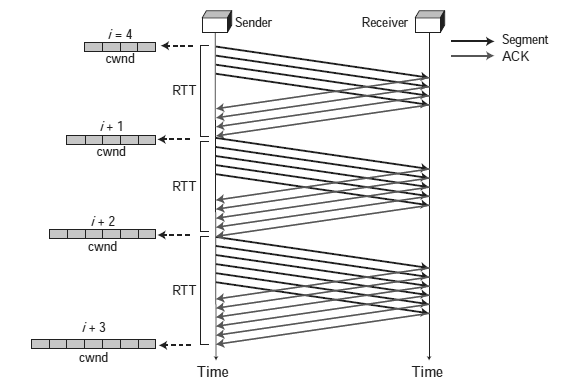 Most TCP implementations have two reactions:

1. If a time-out occurs, there is a stronger possibility of congestion; a segment has probably been dropped in the network and there is no news about the following sent segments.

In this case TCP reacts strongly:

a. It sets the value of the threshold to half of the current window size.
b. It reduces cwnd back to one segment.
c. It starts the slow start phase again.

In this case, TCP has a weaker reaction as shown below:

Most TCP implementations use at least four timers

The TCP header can have up to 40 bytes of optional information.

If Window Scale Factor is 3.
An end point receives an acknowledgment in which the window size is advertised as 32,768.